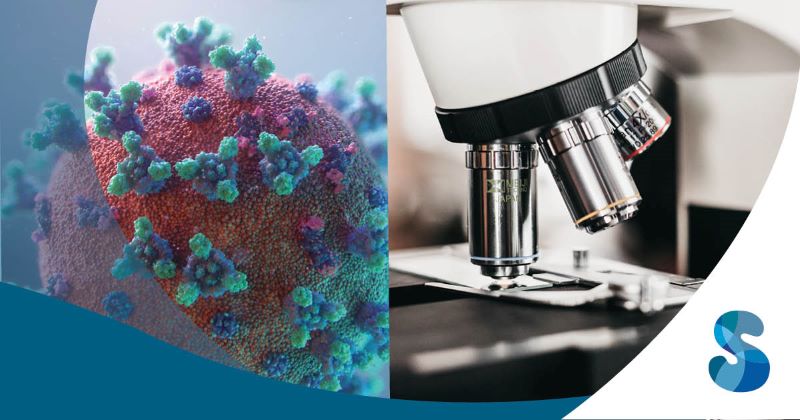 Early on in the COVID 19 Pandemic the European Commission petitioned ongoing H2020 research projects to take reasonable action to aid in Europe’s response to the pandemic. The case study of Barcelona partially deals with Wastewater-Based Epidemiology (WBE) and thus was very well position to heed this call.

WBE is a field of science in which biomarkers in wastewater (WW) are analysed in order to mine information on the inhabitants within the sampling sewershed (catchment area of sewage). The first publication showing a correlation between a biochemical marker in sewage and prevalence of infection of COVID-19 was published in May 2020 by Medema, Heijnen, Elsinga, Italiaander, & Brouwer (2020). The biomarker used in sewage is excreted in faeces. (Wölfel et al., 2020).

The WBE method used within the SCOREwater project is based on a qPCR protocol in which the SARS-CoV-2 RNA is extracted from wastewater, converted to complementary DNA (cDNA) and specific probes are used to amplify the cDNA which is then quantified relative to a standard calibration curve. The qPCR primers used in WBE are identical to the US CDC primers used in clinical qPCR that are used to ascertain if an individual is infected with the virus.[PdJ|E1]

Within the case study of Barcelona, three monitoring stations were built covering a high, a medium and a low income neighbourhood. The first station was finalised in December 2020 and all stations were operational by March 2021. In the meantime, personnel at ICRA had already started working with SARS-CoV-2 (Rusiñol et al., 2021) and by the time the stations were operational the research group and collaborations already had methods in place to be able to track the spread of COVID-19 within the neighbourhoods Sant Gervasi, Poblenou and El Caramel.

Benefits of monitoring at the neighbourhood level

A few WW samples at any given time can give a summarised picture of the prevalence of infection within the study area. Putting the results in the perspective of an end-user such as Health Authorities, WW monitoring at neighbourhood level increases the spatial specificity relative to a wastewater treatment plants (WWTP)  (Figure 1) which could potentially be highly relevant when enacting restrictive measures.

Setting limitations over large populations, ignores the fact that within this population infection rates might be very different, thus risking imposing restrictions where they are not needed while also diluting the effect subsequent limitations might have due to restriction fatigue by the population.

Neighbourhood-level WBE data is also more informative than WWTP-level data due to the fact that sampling sites can be chosen to cover majority domestic units with little or no industrial wastewater.

Challenges of monitoring at the neighbourhood level

These benefits at neighbourhood-level come to the expense of Sampling Ease and Robustness (Figure 1). While WWTPs operators routinely collect samples for other compulsory analysis, sampling at neighbourhoods required specific infrastructure that was constructed within the SCOREwater project.

In terms of the labour effort per covered inhabitant this is also much higher at neighbourhood level. That is one sample from a WWTP can cover hundreds of thousands of people and many square kilometres, whereas the same sampling effort for our SCOREwater neighbourhoods covered less than 25,000 inhabitants and a maximum of 0.7 square kilometre.

The robustness at neighbourhood level is also believed to be lower. Inter-neighbourhood mobility can easily be higher than the mobility of visitors and residents within WWTP sewershed areas. By the law of large numbers, sampling smaller populations is also trickier in that the influence of a few individuals relative to the total population might be stronger, thus an infected individual, or a “super spreader” (an infected individual that is shedding orders of magnitude higher loads of the SARS-CoV-2 virus) travelling in or out of the neighbourhood could substantially alter WBE levels. 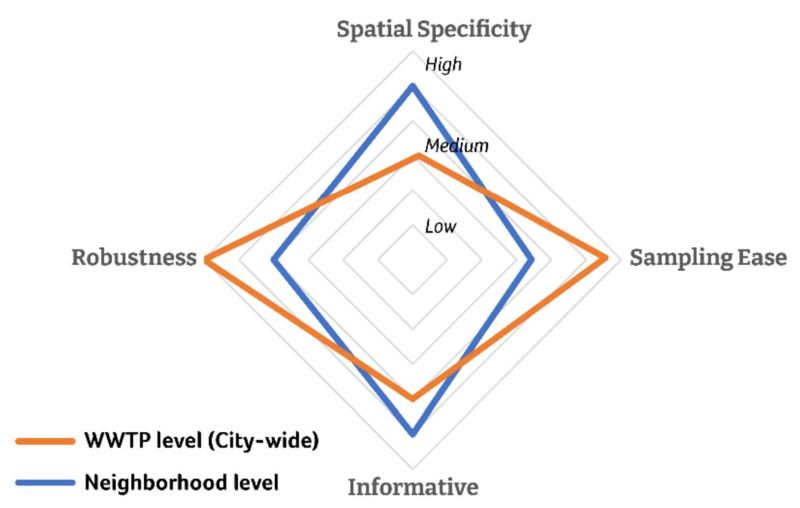 Want to read more? The full deliverable, which includes more detailed results, will be published this fall. Sign up for the SCOREwater newsletter to stay up-to-date on the developments.