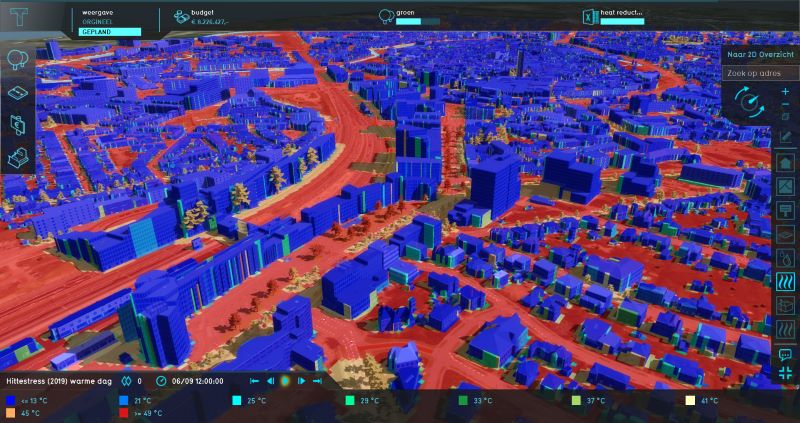 Within the SCOREwater project the City of Amersfoort experiments with the use of so-called ‘digital twins’. A Digital Twin is a digital 3D-copy of a physical object like a city or neighborhood. The images accompanying this story show what a digital twin can look like. A digital twin has various advantages over currently used models. One is that because it shows proposed changes in 3D, it is more easy to comprehend than documents or 2D-representations. Furthermore, digital twins can calculate the effect of changes on multiple policy areas at once. By doing so, they make it easier for cities to make integral assessments of proposed changes. This is increasingly important as cities are faced with many challenges that compete for space, ranging from climate adaptation to energy transition and housing shortages.

For this specific project, the city of Amersfoort collaborated with the Dutch National Institute for Public Health and Environment (RIVM) to integrate and test the Green Benefit Planner (GBP) using the city’s digital twin. The Green Benefit Planner is a calculation model that calculates societal benefits of different greenery scenario’s.  To be able to use this model, several steps had to be taken.

First the calculation ‘core’ of the GBP had to be linked to the digital twin environment. The city of Amersfoort uses software developed by Tygron, a company based in The Hague, Netherlands. The GBP was linked to their software. Second, the city developed different greenery scenarios for one of its neighborhoods. These scenarios differ on the percentage and location of greenery. The scenarios were ‘run’ through the model to calculate the effects on 17 indicators such as: improved air quality, lessened heat stress, and improved productivity. The GBP adds all these together to calculate ‘total societal benefits’, which can be used to assess whether the benefits of adding greenery are deemed large enough to outweigh the costs.

For the city, an important advantage of digital twins is that they make it easier to comprehend proposed changes in the urban environment. To discuss whether this is also perceived this way outside town hall, the results of the pilot were discussed with local citizens. These citizens reflected on the use of both digital twins and the GBP. They concluded that although both tools provide significant value and deserve further development, they also raise ethical questions. Examples include: is adding greenery always a good thing? If it increases the value of housing, who benefits and who does not and how is this weighed in the process? How do we make these models understandable, given the complexity of the way they calculate? Difficult questions that the city will investigate further by placing values such as ‘openness’, ‘transparency’ and ‘constant collaboration with citizens’ at the core of this project.