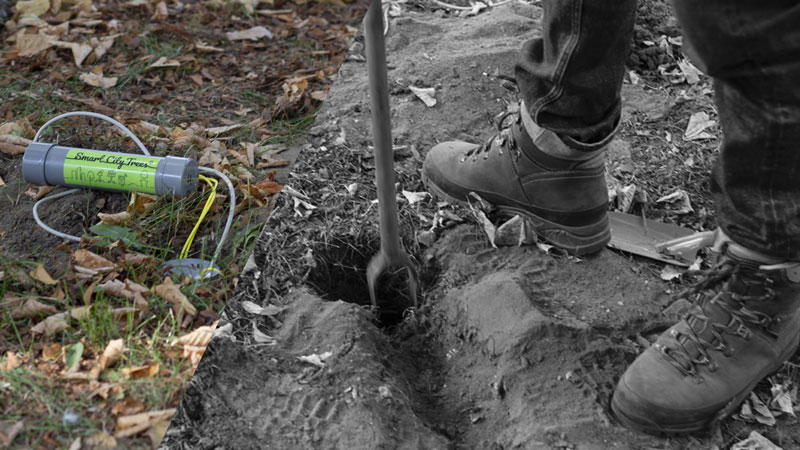 The city of Amersfoort currently has gathered one full year of soil moisture data. This is the perfect occasion to look at what has been achieved and how the future looks like.

There were some problems at the start of measuring soil moisture, but those initial problems were resolved at the end of 2020. Now, one year later, all the gathered data is being looked at by the municipality’s data and analysis department. A number of hypotheses formulated at the start of the project were tested by them.

Hypotheses that are currently tested:

These hypotheses were tested by the analysis department of the municipality. They saw a clear relationship between the composition of the soil (soil type) and the amount of soil moisture present, and a clear relationship between the lack of precipitation and decreasing soil moisture levels. Hypotheses, 1, 2, 3 and 7 could be tested with the current data available. However, for the other hypotheses the data is inconclusive to confirm or reject those. The upcoming year will be used to gather more data, which hopefully enables them to confirm or reject more hypotheses.

The difficulties of measuring soil moisture

What makes it difficult to make bold claims on soil moisture are the many mutual dependencies, and the fact that the soil moisture measurements are spot measurements. Meaning that moving one meter to the left or right could already greatly influence the measurements. Furthermore, there are also other factors in play like the groundwater level, soil type, pavement, shade, sun, temperature and trees or other vegetation. This all makes it very difficult to make substantial claims according to Anne Vrouwe, advisor environment at the municipality Amersfoort.

All the data being gathered serves a purpose. The ultimate goal is to quantify the measures that help to create a more climate resilient Amersfoort, according to Anne Vrouwe. All the data gathered within the SCOREwater project is being used to improve the climate adaptation guidelines of the municipality. There are already some guidelines in place, the most concrete being the municipality’s

‘climate-proof construction directive’ (richtlijn klimaatbestendige bouw)[1], which gives guidelines on the points that need to be addressed when building within the city borders. The current directive is published on February 10, 2020. Furthermore, the municipality actively promotes sustainable measures relating to climate mitigation and climate adaptation on their own website[2], and on a separate website called ‘amersfoortrainproof.nl’, aimed at the residents of Amersfoort.

Looking at the future Anne Vrouwe sees possibilities in involving local residents more on this topic. Plans are to further involve them in measuring soil moisture – which already started through collaborations between the city and the citizen science collective MeetJeStad. One of the ideas is to expand these measurements to measuring soil moisture on green roofs, a roof that is covered with vegetation. This will provide a better understanding of the water-needs of the vegetation.